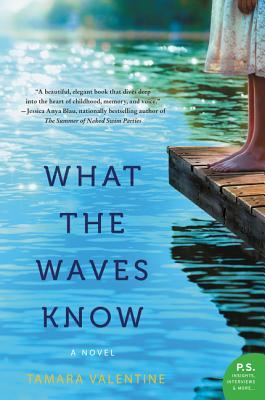 What the Waves Know is an enchanting heartrending exploration of love, loss and mental illness through a child's eyes– A must read.In the graceful narrative tradition of Sue Monk Kidd and Beth Hoffman comes an exquisite debut novel about a young woman's quest to reclaim herself—and the voice she left behind — on the gritty New England island where she lost both.Nineteen miles off the rocky Rhode Island coast lies the tiny isle of Tillings and the memory of Izabella Rae Haywood's sixth birthday– when her universe reeled sharply off course. Tucked deep in her pocket, Iz carries a small amber seastone and the secret of the evening her father disappeared– taking her words with him.Eight years later in the autumn of 1974, Iz’s mother is through with social workers, psychiatrists, and her daughter's silence. In one last attempt to return Iz's voice, the pair board the ferry back to Tillings in hopes that confronting the past will help Izabella heal herself and begin to piece together the splintered memories of the day her words ran dry. But heartbreak is a difficult puzzle to solve– and truth is elusive where magic and madness collide. When the residents of Tillings greet them with a standoffish welcome it becomes clear that they know something about Izabella's dreamer of a father that she does not. Now, as the island's annual Yemayá festival prepares to celebrate the ties that bind mothers to children, lovers to each other, and humankind to the sea, Izabella must unravel the tangled threads of her own story and reclaim a voice gone silent… or risk losing herself—and any chance she may have for a future—to the past.• Named a Monthly Top Pick: Indie Top Seller and Most Anticipated New Release• Run, don't walk, to your phone or Amazon to pick up a copy of this book... it is beautiful–Dr. Mari Dias, WPRO Radio• What The Waves Know charts an unforgettable "journey of trauma and healing, [as] the walking wounded repair their lives together, their voices shaping a rough chorus that calls us back from darkness to light– USA Today bestselling author Pamela Schoenewaldt• A moving, magical novel that asks us to consider the stories which tell the truth and the stories we tell ourselves

TAMARA VALENTINE was born in rural upstate New York where she spent much of her time deep in the northern wood astride a horse in search of hidden worlds; in college, she found them instead in the bitten up wood of a pencil and an old journal. With a deep awe of the power of stories, their transformative and healing nature, she obtained a B.A. in English with a concentration in Communications in 1991 and an M.A. with distinction from Middlebury College Bread Loaf School of English in 2000 where she made her first attempt at crafting a novel.

For the past fourteen years, Tamara has held the position of Professor of English at Johnson & Wales University in Providence, Rhode Island where she teaches an array of advanced writing, literature, and communication courses. During her years of writing, she has contributed to Parent’s Paper Magazine, Stillwater, The Maze, Teacher as Writer, and publications for the New England Association of Teacher’s of English, as well as select biographies and articles for the former Goosewing Press. Presently, Tamara lives in Kingston, Rhode Island with her husband and three children where they spend their free time as accomplished beach bums — not far from where she began as a child — still seeking hidden worlds.

Told through the eyes and the voice of a child WHAT THE WAVES KNOW is a brilliant, touching and heartbreaking story that is not only original, but also captivating.  It was beautifully written, thought provoking and a read that will stick with me for a long time.  This is one of those books that would be perfect for book clubs because there is so much to discuss and so many emotions to process.
It really is a MUST READ.  5 stars