Highlight: Beggars or Angels: How a Single Mother Triumphed Over War, Welfare and Cancer to Become a Successful Philanthropist... by Rosemary Tran Lauer 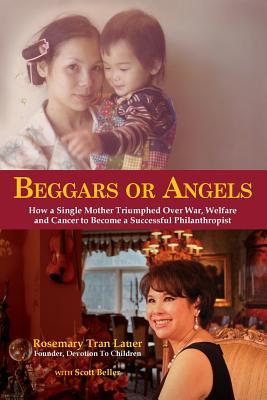 Imagine waking up tomorrow in a foreign land with no home, no money, no grasp of the language, no formal education, no friends or family for support, and with two kids under age three depending on you. What would you do? Beggars or Angels: How a Single Mother Triumphed Over War, Welfare and Cancer to Become a Successful Philanthropist tells the inspirational story of Rosemary Tran Lauer, a mother who found the will and a way to survive when faced with this overwhelming scenario. Drawing on her strength, bold resourcefulness, and sense of humor, Rosemary was eventually able to give her family a wealth of opportunities they wouldn't have dared dream about in the war-torn homeland they left behind. A courageous welfare-mother-turned-philanthropist, she was willing to sacrifice everything but her self-respect for the sake of her children's futures . . . and for the futures of thousands of families around the world. Beggars or Angels is about one woman's dare to care and her persistent search for a reason "why." Once she discovered it, Rosemary transformed her years of struggle into an altruistic ambition and purpose-the child care advocacy nonprofit Devotion to Children.