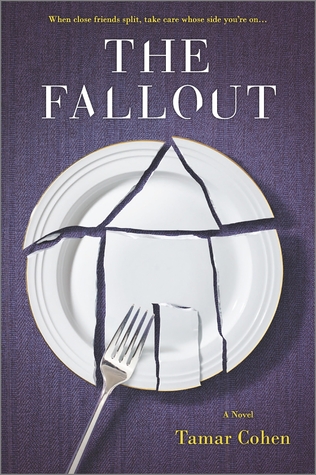 When close friends split, take care whose side you're on…

Dan and Sasha are Josh and Hannah's closest friends, and lately they all seem to spend more time with each other than they do apart. But cozy weekends together quickly dissolve into a bitter game of tug-of-war when Dan utters three treacherous little words: I'm leaving her.

Dan fully expects Josh to defend his choices—and that includes welcoming the sexy young model he's suddenly dating. Meanwhile, Dan's soon-to-be-ex-wife Sasha is devastated—dangerously so—by his betrayal, and she leans heavily on Hannah for support. Though Josh and Hannah try desperately to avoid the fallout of their friends' battle, they're quickly engulfed by the poisonous fog of attack lawyers, ugly accusations and untimely revelations. Soon they're suffocating in Dan and Sasha's secrets…and their own.

Darkly witty and utterly chilling, The Fallout exposes the volatile nature of divorce—and the new lovers, obsessions and broken relationships that are left in its wake.

Tamar Cohen is a freelance journalist who lives in London with her partner and three teenage children.