A family is shaken to its core after the mysterious disappearance of a teenage boy in this eerie tale, a blend of literary fiction, psychological suspense, and supernatural horror from the author of A Head Full of Ghosts.
“A Head Full of Ghosts scared the living hell out of me, and I’m pretty hard to scare,” raved Stephen King about Paul Tremblay’s previous novel. Now, Tremblay returns with another disturbing tale sure to unsettle readers.
Late one summer night, Elizabeth Sanderson receives the devastating news that every mother fears: her thirteen-year-old son, Tommy, has vanished without a trace in the woods of a local park.
The search isn’t yielding any answers, and Elizabeth and her young daughter, Kate, struggle to comprehend Tommy’s disappearance. Feeling helpless and alone, their sorrow is compounded by anger and frustration: the local and state police have uncovered no leads. Josh and Luis, the friends who were the last to see Tommy before he vanished, may not be telling the whole truth about that night in Borderland State Park, when they were supposedly hanging out a landmark the local teens have renamed Devil’s Rock.
Living in an all-too-real nightmare, riddled with worry, pain, and guilt, Elizabeth is wholly unprepared for the strange series of events that follow. She believes a ghostly shadow of Tommy materializes in her bedroom, while Kate and other local residents claim to see a shadow peering through their windows in the dead of night. Then, random pages torn from Tommy’s journal begin to mysteriously appear—entries that reveal an introverted teenager obsessed with the phantasmagoric; the loss of his father, killed in a drunk-driving accident a decade earlier; a folktale involving the devil and the woods of Borderland; and a horrific incident that Tommy believed connects them.
As the search grows more desperate, and the implications of what happened become more haunting and sinister, no one is prepared for the shocking truth about that night and Tommy’s disappearance at Devil’s Rock. 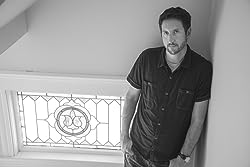 Paul Tremblay is the author of A Head Full of Ghosts (William Morrow), coming June 2, 2015. He's also the author of the novels The Little Sleep (Henry Holt), No Sleep till Wonderland (Henry Holt), Swallowing a Donkey's Eye (CZP), and Floating Boy and the Girl Who Couldn't Fly (co-written with Stephen Graham Jones).
He is the author of the short story collection IN THE MEAN TIME (CZP). His essays and short fiction have appeared in the Los Angeles Times and numerous "year's best" anthologies. He is the co-editor of four anthologies including CREATURES: Thirty Years of Monster Stories (with John Langan). Paul is the president of the board of directors for the Shirley Jackson Awards. He lives outside of Boston, Massachusetts, has a master's degree in Mathematics, and has no uvula. You can find him online at www.paultremblay.net.Paul is very truthful and declarative in his bios. He once gained three inches of height in a single twelve hour period, and he does not have a uvula. He has a master's degree in mathematics, teaches AP Calculus, and once made twenty-seven three pointers in a row. He lives outside of Boston, Massachusetts and he is represented by Stephen Barbara, InkWell Management.