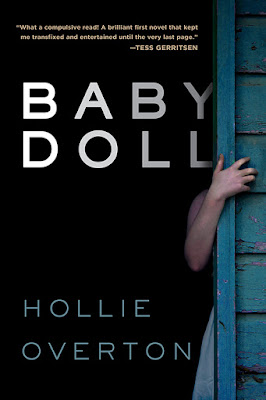 
ABOUT THE BOOK
"What a compulsive read! A brilliant first novel that kept me transfixed and entertained until the very last page." -- Tess Gerritsen, New York Times bestselling author of Die Again

Escape was just the beginning.

Held captive for eight years, Lily has grown from a teenager to an adult in a small basement prison. Her daughter Sky has been a captive her whole life. But one day their captor leaves the deadbolt unlocked.

This is what happens next... to Lily, to her twin sister, to her mother, to her daughter—and to her captor.

For fans of Gone Girl and Girl on the Train, BABY DOLL is the most tense thriller you will read this year.

First Line:  A dead bolt has a very specific sound.

Thoughts:  I have read a bit of this book and it is really intriguing!  It has one of those starts that compels you to continue to read.  Early thoughts on this book is that is it going to pull the reader in and keep them guessing throughout.

One (1) winner receives a hardcover copy of BABY DOLL.

Giveaway open to US addresses only.
Prizing and samples provided by Redhook.

ABOUT THE AUTHOR:
A tense, unique psychological thriller, Baby Doll is a remarkable first novel from TV writer Hollie Overton, who has worked Cold Case, The Client List, and the new Shadowhunters on ABC Family.

Debut author Hollie Overton was raised by her single mother, and Hollie—an identical twin herself—draws on her unique childhood experiences for her first novel, Baby Doll. Overton's father was a member of the notorious Overton gang in Austin, Texas, and spent several years in prison for manslaughter. Hollie is a television writer and resides in Los Angeles.

DISCLOSURE:
This post is brought to you in partnership with Redhook.