#MMBBR #Highlight The Boy with a Bamboo Heart: The Story of a Street Orphan Who Built a Children's Charity By Chantal Jauvin

The Boy with a Bamboo Heart: The Story of a Street Orphan Who Built a Children's Charity 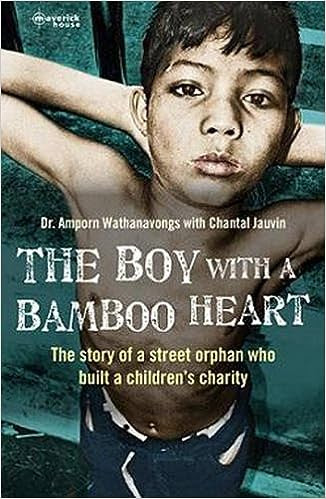 Orphaned at the age of five in a rural Thai village, Lek is thrust into a life-long struggle to find his place in the world. Alone and impoverished, he treads a precarious path, barely surviving in the markets of Surin until, at age fifteen, he finds himself brandishing a rifle as a boy soldier in the Cambodian jungle. Despair leads him to two suicide attempts. He is hell-bent on succeeding on his third try, but a stranger intervenes and offers him hope. Thus begins Lek's journey to become Dr. Amporn Wathanavongs, foster father to more than 50,000 Thai children. Driven to become a reputable member of society, he returns to his boyhood village to study at the local temple. But when his vows as a monk collide with his desire to learn English and have a family, he must choose between settling for a safe and predictable life, or risk living as a vagrant on the streets of Bangkok while searching for a way to make his dream a reality.
Through the generous support of a Jesuit missionary working in Thailand, he achieves his objectives. But having a family, a formal education, and a respectable job in social work are not enough. He perseveres and finds his true calling helping others. With the exotic landscape of Thailand as a backdrop, Boy with A Bamboo Heart tells the story of one man's quest for happiness."


Chantal Jauvin is an international attorney who has combined her passion for experiencing other cultures with her pursuit of a global legal career. She has lived in Japan, Mexico, Cambodia, Russia, Austria, taking shorter assignments in Vietnam while pursuing her MBA studies in the UK. She has negotiated in Paris, Buenos Aires, and Sao Paulo often enough to almost call these cities home. Igniting her lifelong enthusiasm for language and other societies, she has turned her attention to writing in her quest to understand how our souls are touched by the blended world in which we live. Jauvin currently resides with her husband in Philadelphia, Pennsylvania.


Connect with Chantal Jauvin on LinkedIn, Facebook , and on her website, http://chantaljauvin.com/. For more information on FORDEC, please visit, http://fordecusa.org/