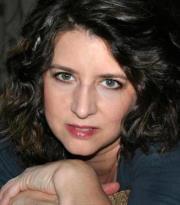 Author Bio:  Denise Grover Swank lives in Lee’s Summit, Missouri. She has six children, three dogs, and an overactive imagination. She can be found dancing in her kitchen with her children, reading or writing her next book. You will rarely find her cleaning.  You can find out more about Denise and her other books at www.denisegroverswank.com or email her at denisegroverswank@gmail.com

One of the many reasons I think so many more people are writing books (other than word processing programs on computers and eBooks) is that it’s so much easier to research for a book. Back in the day, when I wrote a paper for school, I had to go to the library and look things up in books and magazines. Microfiche anyone? (My dinosaur was named Rex and we fed him ground up baby brontosauruses.) But times have changed and my children simply open a search engine and type in any abstract phrase and are bombarded with results.  I do the same thing when I’m writing a book.

I’m forever amazed the Google will take my random string of words and often give me something that is actually useful. Some books require more research than others. When I wrote Chosen the first The Chosen book of my urban fantasy/paranormal romance series, I’m sure I was put on a government watch list. AK47’s (powerful but not that accurate) How to make a truck explode (harder than you might think) How to break into a gun cabinet (did you know that you can pick some gun cabinet locks with Bic pens?) Gunshot wounds to the thigh (lots of gross pictures) Writing The Rose Gardner Mysteries is like taking a deep breath of fresh air. Rose’s life is much simpler than Emma and Will’s in Chosen or Julia, Evan and Reece’s in Here, the first book in my YA series. But there’s still research involved. In Twenty-Nine and a Half Reasons, Rose is summoned for jury duty. I’ve been summoned multiple times myself, in multiple states. I even served on a Federal jury once (not as exciting as you might think).  But every state, every county is different. It helps that Fenton County and the quirky town of Henryetta, Arkansas are fictitious, but I still wanted Rose’s experience to be as realistic as possible.

I searched for juror’s daily pay, the rules they are given, what the consequences are if they disobey. I watched an edge-of-your-seat video produced by the state of Arkansas MANY TIMES to make sure I understood the parts I most needed to focus on. (Thank you great state of Arkansas for providing this video to the public. I was more helpful than you know.)

You too can watch this video!!!  Here’s the link! https://courts.arkansas.gov/juror_orientation.cfm

I researched other things too, things you might think strange. Starting a nursery, zoning laws, if public defenders are county employees, the punishment for juror misconduct, bookies, the name of the magazine that covers social events in Southern Arkansas, real estate investing companies…you get the point. I’m sure I got some things wrong and at some point some discerning reader will email me to let me know, but know that I’ve done the best I could to make it accurate as possible.  Now I’m off to research hotel floor plans in St. Louis. Figure that one out.

“Watch where you’re going!” a voice snarled above me.
The papers settled enough for me to stare into the angry blue eyes of a man wearing a dark suit, a white shirt and a crisp yellow tie. His dark blond hair was short but styled. He leaned down and I couldn’t help my involuntary squeak as I scooted back in fear.
“This is a courthouse, not a barroom brawl.”
“I... I’m sorry...” I stammered, caught off guard by his hostility. I reached for the paper closest to me.
“Don’t touch those!” He reached for the sheets, his shirtsleeves pulling back to reveal his wrists. No scars. He was scary enough without worrying that he was the man in the restroom.
Jerking my hand back, I got to my knees and grabbed the wall to pull myself up. “I was only tryin’ to help. No need to be nasty about it.”
His entire face puckered as he squatted. “You’ve helped quite enough. Thank you.” Even with his snotty tone, his cultured Southern accent was evident. He appeared to be in his early thirties, but his attitude and haughtiness reminded me of the women in the Henryetta Garden Club. The ones from old Southern money.
“I’m sorry. It’s just that I’m late to jury duty—” 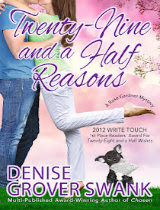 A throaty snort erupted. “Of course you are. Why am I not surprised?”
Indignation squared my shoulders. “It’s obvious that your mother raised you better than this. What do you think she would say, knowing you were treatin’ a lady this way? You should be ashamed of yourself. Mr...” My eyebrows rose as I waited for him to answer.
His jaw dropped halfway through my tirade and his cheeks pinkened, making him look younger and less hardened. “Deveraux.”
“Mr. Deveraux.” I pursed my lips in disapproval. Any properly raised Southern gentleman was terrified of his mother’s wrath. Especially when the combination of poor manners and women were involved. “I suggest you brush up on your manners.” I turned left and started down the hall only to realize, to my horror, I had gone the wrong way. I stopped midstep and squeezed my eyes shut. This whole morning had to be a nightmare, just a bad dream. Situations like this didn’t happen in real life.
Only, in my life, they did.
Sucking in a deep breath, I spun around and headed the opposite direction, teetering on my broken heel. With my jaw thrust forward, I tried to pass Mr. Deveraux with as much dignity as I could muster.
Mr. Deveraux, to his credit, ignored me as he continued to scoop up the papers and stuffed them into manila folders.
Just when I thought I was home free, I heard a smug voice behind me. “Fourth door on the right.”
The sound of my click-thud steps echoed off the hard surfaces in the hallway, but I continued walking, in spite of my billowing mortification. It’s hard to look dignified when you’re swaying like a sailor. Finally, I reached the fourth door. I glanced down at my letter to make sure I had the right room, not trusting Mr. Crabbypants, but my hand was empty.
I’d dropped the letter.
Closing my eyes with a sigh, I wondered how this day could get worse.
“Lose something?”
A groan escaped before I could squelch it. I opened my eyes and plastered on a smile.
Mr. Deveraux handed the paper to me with a smirk. “A gentleman always helps those less fortunate, Miss Gardner.” He tilted his head toward me before moving briskly down the hall. “You’re late. You better get in there,” he called out, looking straight ahead.
----------------------------------------------
Check out my blog tour stop for
Denise Grover Swank's novel HERE
----------------------------------------------