BOOK DESCRIPTION:  After thirty-four years of just letting life happen to her, Paula Tenenbaum’s mundane existence was suddenly interrupted. It was bad enough to be fired from her job because she was “average”, but on that same day, her boyfriend also dumped her for being “un-dynamic.” Somehow, someway Paula needed to make a change. But before she could figure out what her first step should be, her scheming neighbor Larry tapped into her silent desperation and dreams and challenged everything that she believed about herself. At first Paula was skeptical and scared, but quickly, she realized that she had nothing to lose, as she donned the persona of the successful, and vibrant individual that she had always dreamed of being, navigating thru business, colorful personalities and the people that she had idolized from afar. Written with sharp humor, and huge personality, Paula Takes A Risk is the hilarious story about the metamorphosis of Paula Tenenbaum, who naively enters into an adventure that changes her life. This is a story certain to strike a chord in anyone who secretly desires change, but is afraid to make it.
************************************************************************

Randi Sherman, a native Californian, lives in San Francisco. With her tremendous grasp of the obvious, Randi has always had the ability to find humor in the mundane and share the laughter. She dares to examine and discuss everyday foibles, which obliges people to stop taking themselves too seriously. 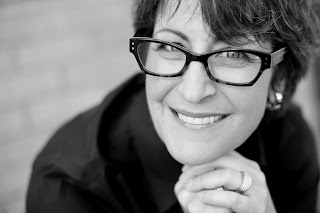 Developing characters and writing have been a part of Randi’s life since she was a teenager, umm-mmum-mumm years ago. She spent time performing stand-up comedy at Los Angeles club amateur nights and studied Improvisation in the Bay Area. Realizing that she preferred having an income, living indoors and eating regularly, she reluctantly put her dreams on hold and entered the corporate world, yet never left behind her sense of humor and creative storytelling ability, skills which were not always appreciated during budget and strategy meetings.
Now, after living indoors for a while and eating, albeit too much, her book, Paula Takes a Risk is here. Randi’s unique wit, writing style and candor will surely make the reader sit up, stand up, roll over or assume an interested leaning position and take notice.
Randi would never claim to have a genius IQ, the body of a super model or always have the right thing to wear. However, she can spell the words, “smart” and “supercalifragilisticexpialidocious.” Randi maintains a trim, well-toned body that is cleverly concealed beneath twenty pounds of soft protective layering and she has the appetite of a bird. (By “bird” I mean vulture.) Her entire wardrobe consists of black, black and varying degrees of black, except for those items that are covered with lint because she put them through the wash with a tissue.
Things that Randi cannot live without: people to laugh with, her car horn, a gym membership where there are chubby women who break into a sweat while putting on a jog bra, wine, waist capes, and her partner, Carol.
Randi does not like mean-spirited people, liver, left-overs, communal dressing rooms, tight underwear, and people who point.
Randi is five-foot-seven.

TROUBLE MAKER?! Who? Me? Well, maybe just a little. Can’t we just call it dilemma design? I do however, clean up my mess. I am a problem solver. In fiction, the author needs to create obstacles to make the story and characters interesting. Otherwise, why not write a business manual or a book about crocheting?

Creating and resolving characters dilemmas are my favorite things about writing fiction. I think about all of the possibilities and take into consideration all of my character’s short-comings and perceived obstacles. I list all of the risks and ramifications. Then I asked myself: What if there wasn’t a perceived notion of what is the right or wrong thing to do? What if there wasn’t a risk? So, in the case of PAULA TAKES A RISK, I decided to charge ahead and overcome the obstacles as they presented themselves using common sense, humor and chutzpah to transform Paula into the fearless and accomplished person she always dreamed of being.

When the reader meets Paula, she is afraid, lonely, and bored with her life. She let life happen to her, doing only what’s expected and not making any waves in the process. Being ‘average’ cost Paula her job, her boyfriend and her self-confidence. She desires change and an exciting life, but lacks the motivation and courage to take a risk and make her dreams come true. So it was my job as the writer is to find a way to give it to her, to solve her problems and change her life.

I asked Paula to endure uncomfortable situations, make ill-advised decisions and jump without knowing where she would land. Like anyone taking a risk, Paula is not only apprehensive, and overwhelmed, at times she also excited and surprised. As a result Paula becomes learns how to be the woman she never thought she could be and discovers that without risk, there is no glory.

Make some trouble. Take a risk. Live the life you always wanted.