Ophelia Browne knows a memory can outlive its owner. She knows because she's been granted the unique gift of finding and caring for those forgotten memories. But now she's nearing ninety, and needs to find a successor - soon.

When broken-hearted Annie Cross shows up on the doorstep of The Memory House Bed and Breakfast, Ophelia knows she is the one. The two women forge a bond of friendship as they sip magical dandelion tea and share stories. When Annie starts to sense the memories Ophelia is delighted, but then a thread of violence begins to unravel and she fears things have gone too far.

There is something interesting and different when you read a book that has touches of magic mixed into a story filled with so much heart.  In the Memory House you are taken into a house that hold secrets, memories, love and so much more.  You are shown what friendship and love really mean and are shown that nothing is ever so black and white, but various shades of gray.  It was a delightful story and I am excited to see that this is only the first book the series. 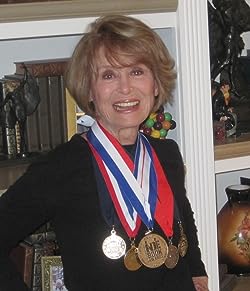 USA Today Bestselling and Award-winning novelist Bette Lee Crosby's books are "Well-crafted storytelling populated by memorable characters caught up in equally memorable circumstances." - Midwest Book Review
The Seattle Post Intelligencer says Crosby's writing is, "A quirky mix of Southern flair, serious thoughts about important things in life and madcap adventures."
Samantha from Reader's Favorite raves, "Crosby writes the type of book you can't stop thinking about long after you put it down."
"Storytelling is in my blood," Crosby laughingly admits, "My mom was not a writer, but she was a captivating storyteller, so I find myself using bits and pieces of her voice in most everything I write."
It is the wit and wisdom of that Southern Mama Crosby brings to her works of fiction; the result is a delightful blend of humor, mystery and romance along with a cast of quirky charters who will steal your heart away. Her work was first recognized in 2006 when she received The National League of American Pen Women Award for a then unpublished manuscript. She has since gone on to win nineteen awards for her work; these include: The Royal Palm Literary Award, the FPA President's Book Award Gold Medal, Reader's Favorite Award Gold Medal, and the Reviewer's Choice Award.
Crosby's published works to date are: Silver Threads (2016), The Regrets of Cyrus Dodd (2016), Baby Girl (2016), What the Heart Remembers (2015), The Loft (2015), Memory House (2015), Passing through Perfect (2015), Wishing for Wonderful (2014), Blueberry Hill (2014), Previously Loved Treasures (2014), Jubilee's Journey (2013), What Matters Most (2013), The Twelfth Child (2012), Life in the Land of IS (2012), Cracks in the Sidewalk (2011), Spare Change (2011).