Highlight: My Life as a Myth by Huston Piner 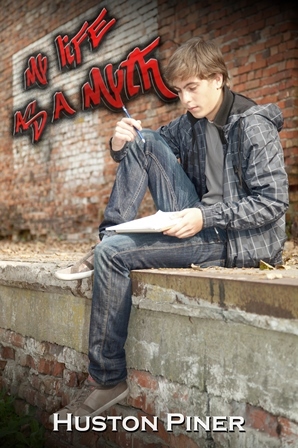 1969 high school freshman Nick Horton has problems. He's an easy target for bullies, a social outcast who dreams of being popular, and he doesn't understand why he's not attracted to girls. After a series of misunderstandings label him a troublemaker, he's delighted to have Jesse and his gang befriend him. But while Nick just wants to explore his growing attraction to Bobby, Jesse promises to give him a new image and transforms the shy loser into an anti-establishment student hero. Thanks to his new reputation, Nick soon finds himself besieged by would-be girlfriends and expectations that he live up to his public image. If it wasn't tough pretending to be straight, now he's got to act cool too!
Nick's freshman year is a remarkable journey of ridiculous misadventures, unexpected psychedelic explorations, and heartbreaking tragedy. As he struggles to understand his emerging romance with Bobby he must confront the dangerous goings-on at school and the Vietnam War's destructive impact on his family. Is a world still reeling from the sexual revolution and the illicit pleasures of underage drinking and marijuana ready to accept two boys in love? Can Nick and Bobby's relationship survive a world where acid rock rules, status is everything and being gay is the last taboo?
Nominated for the 2014 Stonewall Book Award for Children's and Young Adult Literature.