#MMBBR Review: Some Women by @EmilyLiebert 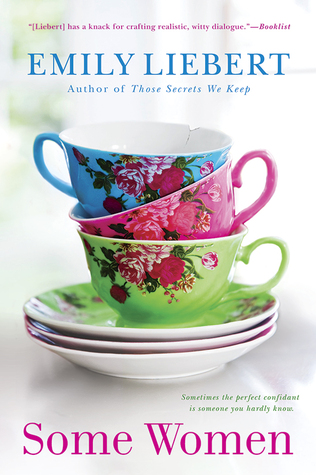 An engrossing and thought provoking novel that examines the intricacies of marriage, friendship, and the power of unexpected connections…

Annabel Ford has everything under control, devoting her time to her twin five-year-old boys and to keeping her household running seamlessly. So when her husband of a decade announces that he’s leaving her, without warning, she’s blindsided. And suddenly her world begins to unravel.

Single mother Piper Whitley has always done her best to balance it all—raising her daughter Fern by herself and advancing her career as a crime reporter. Only now that she’s finally met the man of her dreams, Fern’s absentee father arrives on the scene and throws everything into a tailspin.

Married to the heir of a thriving media conglomerate, Mackenzie Mead has many reasons to count her blessings. But with an imperious mother-in-law—who’s also her boss—and a husband with whom she can no longer seem to connect, something has to give.

On the surface, these three women may not have much in common. Yet when their lives are thrust together and unlikely friendships are formed—at a time when they all need someone to lean on—Annabel, Piper, and Mackenzie band together to help each navigate their new realities.

Emily Liebert is an award-winning author and TV personality. Her new novel, Those Secrets We Keep, published on June 2, 2015.
She's currently putting the final touches on her fifth book, Some Women, set to release on April 5, 2016.
Emily's first book, Facebook Fairytales, is available across the globe. Her debut novel, You Knew Me When (Penguin), published on 9/3/13 to rave reviews! And her second novel, When We Fall (Penguin Random House), published on September 2, 2014!
Emily is featured often in the press, by outlets such as: Today Show, The Rachael Ray Show, Anderson Cooper, FOX News, Good Day New York, The Couch, Oprah Radio, Martha Stewart Radio, The New York Times, The Wall Street Journal, InStyle, OK!, Nylon, Ladies’ Home Journal, Woman’s World, WWD, Woman’s Day, The New York Post, The Washington Post, The New York Daily News, The Chicago Tribune, Boston Herald, and The Huffington Post.
She has also served as a spokesperson for Microsoft, appearing on TV and radio stations nationwide.

Liebert really understands the inner workings of women and because of that she is able to write compelling and thought provoking books that touch my heart.  She's able to write very different characters, all in which you can feel for, root for and connect to and somehow bring them all together in a story that kept me turning pages well past my bedtime.  Bravo, Liebert on another HUGE 5 star hit!  This is a great book for Spring and a wonderful book club selection!