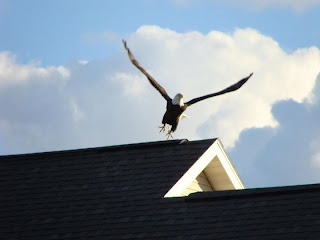 A neighbor took this photo...we have tons of eagles around here...never tire of seeing them!
The Eagle
by Alfred, Lord Tennyson
He clasps the crag with crooked hands;
Close to the sun in lonely lands,
Ring'd with the azure world, he stands.

The wrinkled sea beneath him crawls;
He watches from his mountain walls,
And like a thunderbolt he falls.
﻿

The Eagle via shmoop

In A Nutshell
Alfred, Lord Tennyson has a reputation among some literary folks for being a polite, cautious Englishman, so it might be a surprise to learn he traveled with a friend to the border of Spain to deliver "money and secret messages" to Spanish political revolutionaries (source). He was 21 years old at the time and he soon became disillusioned with the project, but still enjoyed being in the Pyrenees. The Pyrenees, a scenic mountain range on the border between Spain and France, was Alfred Tennyson's favorite place in the world. He especially loved a valley in the Pyrenees called "Cauteretz."

"The Eagle" was inspired by Tennyson's travels in the Pyrenees, where he frequently saw eagles, raptors, and other birds of prey circling overhead. You'll notice, though, that he sets this poem on an ocean cliff rather than a mountainside, so it's not just a literal description of something he's seen. It's an imagined setting.

"The Eagle" was first published in 1851, around the time Tennyson was on his way to becoming the most famous British poet of his age. The poem is considered a perfect combination of sound and meaning. In a few lines, Tennyson captures a small but majestic event – an eagle diving from a cliff – with total precision. For those of you without much experience in reading poetry, many have found that this short work is a great place to begin.

Why Should I Care?

"The Eagle" allows us to look at the world through poetry-colored glasses. It's like a beginner's guide to the craft of poetry, not because it's simple, but because Tennyson doesn't hide his bag of tricks. He lays it right in front of you and says, "Look, this is what alliteration can do. And see this? It's a perfect example of personification. And then the final line – a metaphor, of course." No wonder English teachers love using this work to introduce poetry to students.

Nor does Tennyson hide the fact that he's distorting reality. You could also compare "The Eagle" to a magic mirror in a carnival – the kind that makes your head look like a watermelon and your hips vanish into nothingness. The poem produces similarly strange visual effects. At one point the eagle seems almost as far away as the sun, and at another the ocean looks like a person crawling on hands and knees. Tennyson recognizes that this is how people think. The way we look at the world is determined as much by the funny sounds we use (ahem, words) and the strange comparisons we make as by the actual nature of things. Tennyson takes the same principle we use when we lie on the grass and gaze at clouds ("That one looks like an elephant standing on top of a house!") and applies it to the scene with the eagle.

Some people will say that "The Eagle" captures the essence or truth of an eagle perched on a cliff overlooking the ocean. Their belief shows how persuasively Tennyson presents his own quirky view of things. The poem reveals the power of the imagination to create its own truth. When you look at a magic mirror in a carnival, you know that your head isn't really that wide or your hips that narrow, but that doesn't mean you're looking at an illusion. After all, you and the mirror are really there. What you get is a different way of looking at things. People read "The Eagle" for the same reason they read (or watch) Alice in Wonderland: it's the same old world we all recognize, but viewed with fresh and childlike eyes.
Posted by Mrs Mommy Booknerd