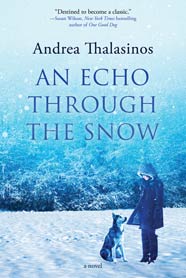 MADISON, Wis. – It's 1992 in the Red Cliff Indian Reservation on Lake Superior and Rosalie McKenzie has several lifetimes already packed into her 18 years, including a long line of dead-end jobs and a destructive marriage. Stuck and feeling hopeless, she can only envision a bleak future for herself...until she meets Smokey.

The exquisite Siberian husky is suffering greatly from neglect, and Rosalie, moved by more than just a gut feeling, sticks her neck out and rescues him. United by a bond deeper than love, the two become a natural pair as they enter the world of competitive dogsled racing. Curious about the history behind this sport and ancient breed of canine, Rosalie digs around and discovers a rich background colored by tragedy and maybe even the supernatural.

Through of a series of mysterious events, her life begins to intertwine with that of Jeaantaa, a young Chukchi woman from eastern Siberia, who lived in the early 1900s. When Stalin's Red Army displaces the Chukchi in 1929, many were killed and others lost their homes. Jeaantaa's devotion to her Huskies, called Guardians, creates a rift with her husband and with the ancient ways of her people, and her stunning choice haunts her family for years to come.

When Rosalie's life in the present day begins to summon the spirit of Jeaantaa, all the strength and potential she failed to see in herself earlier can no longer be denied, and the two narratives meet together in a dramatic present-time conclusion.

An Echo Through The Snow is ultimately a story about the relationship between unlikely people who forge ahead with the belief that a better world is possible.

"Much of my inspiration for this novel has come from watching my students over the years," says Thalasinos, a sociology professor. "It's been moving to note how resilient they are; how they bounce back from trauma and move on to find their lives and save themselves."

For ANDREA THALASINOS, it was the newspaper ad that changed everything. A husky puppy needed a home. Thalasnios, a sociology professor at Madison College, and naturally curious about origins, delved into research about this particular breed. What she found out about these little-known historical and political events spanning 60 years; they inspired a novel. She lives in Madison, Wisconsin with her own dogsled team. Find out more on www.andreathalasinos.com.

It’s the story of how an act of kindness triggered a series of cascading events in many people’s lives.

Apparently the inspiration behind this novel all started with a puppy. Tell us more about that.

The inspiration began with looking into the puppy’s background, the history of the breed.  They’re different from other dogs and I was curious about them.  But when I discovered the parallels between Native Americans and the treatment of many of the Peoples of the Russian Far East, I felt there was a story here that needed to be told.  And particularly what happened to the Chukchi under Soviet collectivization and rule for generations until the collapse and transition into the Russian Federation.  Also, I was curious as to what happened to the dogs that had been central to the lives of the Coastal Chukchi.

How much research and what kind did you put into An Echo Through the Snow?

I was ready to hop on a plane, but the realities of life wouldn’t let me.  So I used the tremendous holdings of the University of Wisconsin Libraries and resources, as well as other articles and books I discovered through my travels.  The most amazing cold weather photography collection, arcticphoto.com.uk gave me current photographic ethnographies of how the Chukchi and surrounding people still live.

How does your educational background lend itself to your creative work?

While I don’t have formal training, e.g. MFA or other professional writing credentials that many have these days, I’m more driven by story and the storm of a creative idea.  Being a sociologist myself, it’s often the creative tug of a social dilemma that precedes everything.

Where did you get the idea to create and then intertwine the two narratives?

While standing under a hot shower one day I realized the lives of these people were inextricably linked.  The task became to allow it to happen. People tried to talk me out of it, rejected it because of it, and I suppose it might have worked more smoothly without doing that, or by focusing on one narrative or the other, but I couldn’t.  That was how the story was conceived, that was how it had to be told otherwise I wouldn’t write it. It wasn’t stubbornness; it was organic, if I may use that word.

How did your real life relationship or impression of animals—specifically dogs—evolve while writing this tale?

Funny thing.  As I began assembling this story, I also began assembling my own sled dog team.  I started with one husky and ended up with six.  My kids and I ran them for eight years through the snowy hills of Wisconsin.  We had a ball!!  Some of the best and fondest memories. When you have that many dogs (and YES they DID all live in the house, on the couch, sleeping in beds with my kids) you see pack dynamics and interactions that others miss when they only have one or two dogs.

What similarities do you see between Jeaantaa and Rosalie?

Both are trapped in marriages, but more importantly the dogs become more important than their lives or safety.  Neither thinks of their well-being before the dogs, especially Rosalie as she moves to save Smokey.

Who, in your opinion, is your target audience?

People who love history, animals, are curious about dog sledding, and are interested in what someone from Library Journal called, and I’m paraphrasing“…history’s darker corners.”

Do you see any yourself in any of these characters?

I see myself in all of my characters.

Finally, where can we find your book?