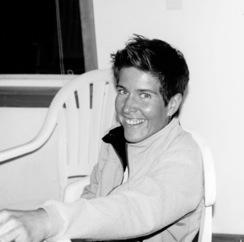 As a child, Wolf grew up in a heavily forested suburb outside New York City with her parents, a younger brother, and an ever-changing menagerie of pet animals.

Both Wolf’s parents and grandparents passed onto her an avid love and respect for nature which explains the photos of Wolf posing with an ever-widening array of pets, including cats, dogs, guinea pigs, mice, quail, two raccoons, chickens, even a squirrel that lived in her bedroom!

Needless to say, hers wasn’t the average American family.
Later, Wolf’s family purchased land in upstate New York and on weekends and summers lived like a regular Swiss Family Robinson, clearing the land, building fences, barns and, eventually, raising and tending cattle, horses, pigs, goats, chickens etc. This led to a very unique life for Wolf and her brother as they lived like farmers on the weekends and students in a suburban public school during the week.

Wolf credits her unique childhood for providing her with keen powers of observation, a passion for living things, unlimited curiosity, and a strong independent streak.
As an adult, Wolf has worked primarily as filmmaker and writer.  THE WAY is her first novel. 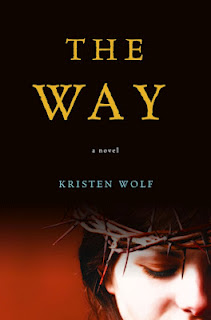 Anna is a fiery tomboy living in ancient Palestine whose androgynous appearance provokes ridicule from the people around her and doubt within her own heart. When tragedy strikes her family, and Anna's father—disguising her as a boy—sells her to a band of shepherds, she is captured by a mystical and secret society of women hiding in the desert. At first Anna is tempted to escape, but she soon finds that the sisterhood's teachings and healing abilities, wrapped in an ancient philosophy they call "The Way," have unleashed an unexpected power within her.

When danger befalls the caves in which the sisters have made their home, Anna embarks on a hazardous mission to preserve the wisdom of her mentors by proclaiming it among ordinary people. Her daring quest and newfound destiny reveal, at last, the full truth of her identity—a shocking revelation that will spark as much controversy as it does celebration.

I write to bring challenge the status quo and offer new possibilities, new paradigms. Every book I’m ever going to write will likely have the same characteristics. Those being: iconoclastic, fantastical, sensual (i.e. drawing heavily on the senses), cinematic (because I “see” the scene before I write about it), and provocative.  For me, the power of story lies in its ability to challenge our beliefs, our paradigms and our assumptions. In other words, in imagining the world as it “could be” rather than “as it is.” In other words, I’m not going to write novels that describe the human condition or experience as much as ones that explore challenging ideas.

There are no limits on what you can explore or imagine.

Not getting overwhelmed with ideas and projects. I’ve always got several book ideas in my head, and sometimes it’s hard to know which one to pursue.

Hmm. Either a filmmaker or a poet or, perhaps, a theoretical scientist.

Did I Leave the Oven On?  Sorry, just kidding. That’s a hard question!  Maybe something clever like, Thoughts Along The Way…

Q.  What is your favorite book of all time?
Whoa!  An even harder question. That’s impossible for me to say. However, I will confess that when I feel depleted creatively, I turn to two sources… poetry and the works of Jeanette Winterson. Both of these refuel me like no other.

The parts that are meditative, that immerse the reader in nature and the act of reverent attention. Some of these I had personally experienced, so I drew heavily on what I could remember.

The ending. I really worried at first because I had no idea how it would resolve itself. And it was complicated!  Fortunately, the idea just dropped into my head. Truly. It was like getting a gift. And I just ran with it.

Hmm. In reality or in my mind?

Q. Can you tell me a little about the inspiration behind your book cover(s)?

The artist at Random House came up with it pretty quickly. At first I wasn’t sure because the scene it shows never actually takes place in the book. However, it does beautifully and provocatively capture the story’s major themes. From that perspective, I thought they did a great job.

Spring. Hands down. Anything and everything is possible in the spring.

The “funniest” comment I’ve gotten over and over, especially in the comment section of interviews I’ve done, or even some book reviews, is that people dismiss the book for being blasphemous, or heretical but then go onto admit that they haven’t read it because, well, it goes against their faith. And while I have deep respect for people’s faith, I would encourage people to read the book – or any book! – before they comment upon it. In the case of THE WAY, I think people would find it’s not at all what they expect.

I actually just finished another novel. It’s not part of THE WAY trilogy. I needed to have some time away from that world before plunging back in. The title of the new novel is ESCAPEMENT. It’s set in music’s Romantic era and is a sensual, lyrical and arousing through-the-keyhole glimpse into the private torment and ecstasy of creative genius. Spun by the female guest and confidant of Johannes Brahms, the story delves into love triangles, obsession, androgyny, and the relentless pursuit of beauty as great artists struggle to approach and possess that which inspires them.

Thank you for all you do to support authors, readers, and the art of story!

Anna clucked gently as they nibbled her
elbows. Her father said goats were the most foolish creatures the Lord had created. But
Anna found their antics and stubborn friendliness amusing. And she laughed at how their
upper lips curled in pleasure whenever she scratched their chins.
In a few more steps, she came to her father’s workshop. Its door was closed. The
glow of an oil lamp shone through its crooked window. Anna heard the familiar brushbrush
of the pumice stone used to polish wood. Whatever her father was making, he was
close to finishing. For the past month, he had been rising earlier than usual to work on a
special project. He had said it was a secret, and would not tell anyone what it was, but the
mere mention of it brought a glimmer to his eye.