#MMBBR #Review Things We Have in Common by @KavanaghTasha 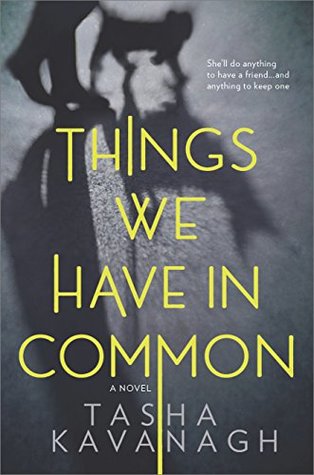 Fifteen-year-old Yasmin Doner is a social misfit—obese, obsessive and deemed a freak by her peers at school. With her father dead and her mother in a new relationship, Yasmin yearns for a sense of belonging, finding comfort only in food and the fantasy of being close to Alice Taylor, a girl at school. Yasmin will do anything to become friends with pretty and popular Alice—even if Alice, like everyone else, thinks she's a freak.
When Yasmin notices a sinister-looking man watching Alice from the school fence, she sees a way of finally winning Alice's affection—because how this stranger is staring is far more than just looking, it's wanting. Because this stranger, Yasmin believes, is going to take Alice. Yasmin decides to find out more about this man so that when he does take Alice, Yasmin will be the only one who knows his name and where he lives…the only one who can save her.
But as Yasmin discovers more about him, her affections begin to shift. Perhaps she was wrong about him. Perhaps she doesn't need Alice after all.
And then Alice vanishes. 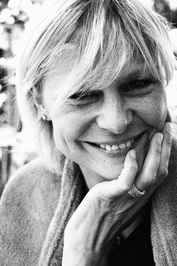 Tasha Kavanagh lives in Hertfordshire with her family and three cats. She has an MA in Creative Writing from the University of East Anglia, has worked as an editor on feature films, including 'The Talented Mr Ripley', 'Twelve Monkeys' and 'Seven Years in Tibet' and has had ten books for children published under her maiden name Tasha Pym. 'Things We Have in Common' is her first novel.

This is a dynamic YA novel, that will keep you guessing and yearning for more.  It ones of those reads that will stop you in your tracks because it is so well drawn, unnerving, suspenseful and unsuspecting.   I was thoroughly engaged and I am still thinking about this read.  It touches on themes that are important for today's times, which makes it a worthy read.