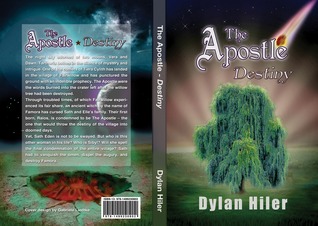 by Dylan Hiler (Goodreads Author)
4.22 of 5 stars 4.22  ·   rating details  ·  9 ratings  ·  7 reviews
The night sky adorned of two moons, Vera and Dawn, Tarthuria bathes in the silence of mystery and intrigue. One of the comets of Tiera Cylith has landed in the village of Fairwillow and has punctured the ground with an indelible prophecy. The Apostle were the words burned into the crater left after the willow tree had been destroyed. Through troubled times, of which Fairwillow experienced its fair share, an ancient witch by the name of Famora has cursed Sath and Elle's family. Their first born, Raios, is condemned to be The Apostle - the one that would throw the destiny of the village into doomed days. Yet, Sath Eden is not to be swayed. But who is this other woman in his life? Who is Sibyl? Will she spell the final condemnation of the entire village? Sath had to vanquish the omen, dispel the augury, and destroy Famora.