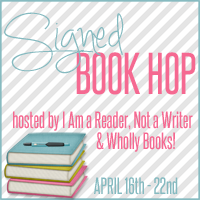 Signed Book Giveaway Hop
April 16th to 22nd
Featuring Books Signed by the Author
Co-hosted by I Am a Reader, Not A Writer and Wholly Books

he love of family. The heartbreak of war. The triumph of coming home.
1940. Rural Wisconsin. Sixteen-year-old Earl “Earwig” Gunderman is not like other boys his age. Fiercely protected by his older brother, Earwig sees his town and the world around him through the prism of his own unique understanding. He sees his mother’s sadness and his father’s growing solitude. He sees his brother, Jimmy, falling in love with the most beautiful girl in town. And while Earwig is unable to make change for customers at his family’s store, he is singularly well suited to understand what other people in his town cannot: that life as they know it is about to change; the coming war will touch them all.
For Jimmy will enlist in the military. And Earwig will watch his parents’ marriage buckle under the strain of a family secret. And when Jimmy returns–a fractured shadow of his former self–it is Earwig’s turn to care for him. His struggles to right the wrongs visited upon his revered older brother by war, women, and life are at once heartwarming and riotously funny. Their family and town irrevocably altered, Earwig and Jimmy fight to find their own places in a world changed forever.

National bestselling author Lesley Kagen makes her hardcover debut with an extraordinary literary thriller, rendered through the eyes of an unforgettable eleven-year-old girl.
During the summer of 1968, Shenandoah Carmody's mother disappeared. Her twin sister, Woody, stopped speaking, and her once-loving father slipped into a mean drunkenness unbefitting a superior court judge. Since then, Shenny-named for the Shenandoah valley-has struggled to hold her world together, taking care of herself and her sister the best she can. Shenny feels certain that Woody knows something about the night their mother vanished, but her attempts to communicate with her mute twin leave her as confused as their father's efforts to confine the girls to the family's renowned virginia estate.
As the first anniversary of their mother's disappearance nears, her father's threat to send Woody away and his hints at an impending remarriage spur a desperate Shenny to find her mother before it's too late. She is ultimately swept up in a series of heartbreaking events that force her to come to terms with the painful truth about herself and her family.
Told with the wisdom, sensitivity, and humor for which Lesley Kagen has become known, Tomorrow River is a stellar hardcover debut.