Q&A with debut author JACK APFEL: A Girl in the Dumpster 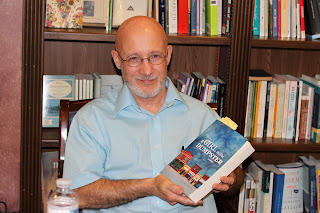 Publication Date: November 28, 2011
One night in the small town of Candlesberg, Wisconsin, a homeless woman approaches a dumpster in search of food. She finds instead a mysteriously mewling bundle. Reaching inside she discovers a patch of matted hair, a tiny ear, a smooth little shoulder. She knows what to do-if only she can conquer her compulsion to drop the newborn and run.

Anne Hedlin is trying to get to sleep in her apartment above her resale shop when she is startled by a banging from the shop below. Anne's solitary life is transformed when she takes in the homeless woman and the baby she finds at her back door. In its first week, the newborn also profoundly touches the lives of Anne's shy teenaged niece, a storefront preacher and his wife, a successful divorced realtor, and the realtor's teenaged daughter, Angie.

Angie's life has become a dumpster of a different sort. She has taken nearly every drug her nominal boyfriend Jake has offered her and in return given him what he wanted--sex. Now the consequences of her choices are crushing in on her and she sees no way out.

With complex characters and surprising twists author Jack Apfel has given us a compelling story of how lives can be knocked off their seemingly inevitable trajectories by an unexpected event, like someone finding a girl in a dumpster.
BUY IT
Posted by Mrs Mommy Booknerd