Carol Tibaldi was born and raised in Bayside, New York and attended Queens College of the City University of New York. She loves to travel and has lived in London and Los Angeles. For twenty five years she worked as a newspaper reporter and covered the crime beat. She is a history buff and loves to research different time periods having a special affinity of the prohibition era and the Civil War. Willow Pond is her first novel and she is hard at work on the sequel.

A.  A lot of different things. I might read an article or overhear a conversation and that will give me an idea for a novel. Stories on the news are also great sources for ideas. I’m always jotting down ideas on the backs of envelopes or on scraps of paper.
Q. What is your favorite thing about being an author?
A.  I love to hear that people have enjoyed reading something that I’ve written. That’s a joy.
Q. What is the toughest part of being an author?
A.  After I get an idea for a book, sitting down to actually write it is the hardest. I’ll do anything I can to avoid it until I realize that unless I start working on it, it will never get written. I’m pretty disciplined, though not all the time.
Q. If you could not be author, what would you do/be?
A.  That’s a good question. When I was a child, I dreamed of being a dancer, but I don’t think that would have ever worked out. I probably would be either an investigator or an historian or maybe a historical investigator, if there is such a thing.
Q. What would the story of your life be entitled?
A. She never gave up.
Q. What is your favorite book of all time?
A. I have two. The Great Gatsby and the Lovely Bones.
Q. Which part of your book(s) was the easiest to write?
A. I’m not sure if I’d say I found any of it easy to write.
Q. Which part of your book(s) was the hardest to write?
A. Probably the historical parts because I had to make sure everything was accurate.
Q. Which character from any book are you most like?
A.  I’m a combination of all three major characters, Virginia, Laura and Erich.
Q. What is your favorite season?
Autumn. I love the cool, crisp air. Unfortunately, it goes by too quickly.
Q.  Are you working on something new?
A.  Yes, I’m working on the sequel to Willow Pond and a contemporary romance set in New York, New Orleans and Italy. I’m about 200 pages into the contemporary romance and hope to finish it by the end of the year.
Q. Anything you want to say to followers of this blog or those that are just stopping by?
A.  I hope they enjoy reading my books. 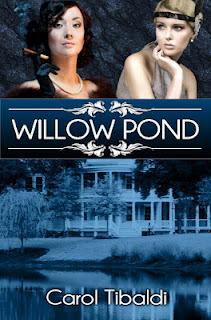 As the Roaring Twenties crumble into the Great Depression, Virginia Kingsley, New York’s toughest and most successful speakeasy owner, is doing just fine; with the whole world falling apart for so many, bootlegging is a flourishing business.

But when a former lover, Rudy, attempts to coerce his way into her business, Virginia sends him packing and her entire family pays the price: Her niece, Laura, is devastated when her infant son vanishes without a trace. Speculation and rumors abound in the media circus that follows the abduction, and the police have few leads, most of which point straight back at Virginia and her fellow bootleggers.

Suspicious of Rudy but unable to go to the police, Virginia pursues her own investigation, shaking down, threatening, and killing one petty crook after another as she races against time to find her missing great-nephew. In the mean time, Laura's lover and Herald Tribune reporter, Erich, tries to convince Laura that Virginia knows more than she is telling... and may be behind the boy's disappearance.

With time flying past and hope thinning, Virginia, Laura, and Erich must set aside their differences and work together in one last, desperate bid to find the missing child and whoever really abducted him.
Posted by Mrs Mommy Booknerd