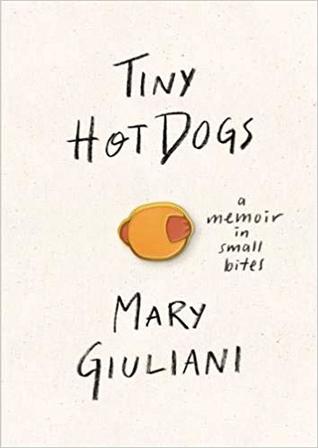 #FirstLine~ When I was eight years old, my father came home with a VCR-which if you don't remember, was the size of a Cadillac-and a VHS tape of Carl Reiner's film The Jerk.


“Giuliani’s entertaining memoir is packed with satisfying stories and recipes that readers will guiltily enjoy.” —Publishers Weekly
“Giuliani has chutzpah to spare in these life-filled, rib-sticking (and-tickling) stories.” —Booklist


Tiny Hot Dogs is a collection of hilarious essays detailing high-profile event planner Mary Giuliani’s winding path from awkward Italian-Catholic school girl in an all-Jewish enclave on Long Island, where she dreamed of being an actress (in addition to having a bat mitzvah like all her friends), to one of New York City’s most prominent food entrepreneurs, dubbed “Caterer to the Stars” by the press. Told in Mary’s easy, relatable voice, we hear of comical celebrity encounters alongside her not-so-easy journey to motherhood. And with the memorable stories come party foods worth celebrating, including the pigs in a blanket Mary loves so much, and the realization that even though her big break didn’t come on Broadway, it did come, because she’s been at the center of the party since!


Mary Giuliani is an author, party and lifestyle expert, and founder and CEO of Mary Giuliani Catering and Events. Mary has appeared on The Barefoot Contessa, The Today Show, Good Morning America, and is a regularly featured guest on The Rachael Ray Show. Her first book, The Cocktail Party (Eat, Drink, Play, Recover) came out in 2015. A graduate of Georgetown University, Mary resides in New York City and Woodstock, NY. Connect with Mary on her website, Facebook, Twitter, and Instagram.
Posted by Mrs Mommy Booknerd