PIECES OF US by Margie Gelbwasser

There are things that are a part of life and cannot be avoided.   For most kids, that is experiencing the trials and tribulations that come with growing up.  Most of us have suffered a breakup, suffered from a bad choice that took us down a wrong path, suffered fights with friends and/or siblings and suffered through issues with our parents.  Pieces of Us touches on all those topics is in honest and realistic fashion.  It is the other side of the story, the side that is not always happy, the side that makes us uncomfortable, the side that shocks us.
Pieces of Us, takes you on a journey through the harsh realities of high school, family relationships and dating violence.  Pieces of Us exposes the ruthlessness of love, betrayal, bullying and other more serious topics.  Pieces of Us shows how technology (computer and cell phones) can be used to bully, intimidate and control an individual.  Making damaging a victim so much easier.
As a parent, Pieces of Us was an emotional read.  It forced me to confront fears and evaluate my parenting.  The stresses our youth are under are greater than when I was growing up.  Sex, alcohol and peer pressure are much more prevalent now.  This story will resonate with me for a long time.  I am still reeling.  I am strongly encouraging every parent to read Pieces of Us.  The struggles described in those pages will leave you wanting to hold your children a bit closer and to love them a bit more.  I am nearly at a loss of words...powerful story.
P.S.  I am in love with this book cover!!! 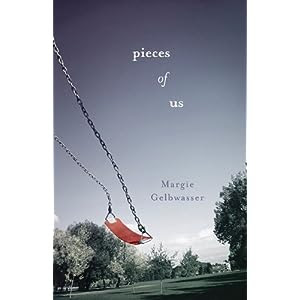 Up at the lake, they can be anything, anyone. Free. But then Katie’s secret gets out, forcing each of them to face reality—before it tears them to pieces.


Margie Gelbwasser is a freelance writer who has written for a variety of magazines. Her first novel, INCONVENIENT (Flux, 2010), was named a Sydney Taylor Notable Book for Teens. It tells the story of Alyssa Bondar, a Russian-Jewish teen who is coping with an alcoholic mother, tuned-out father, hot/cold boyfriend and distant best friend. Margie's next novel, PIECES OF US (Flux, March 2012), is told in 4 POV (one of them second) and focuses on cyber-bullying, abuse, family relationships, and how one teen's actions affect the other three. When not writing, Margie loves hiking, cooking, dancing, and reading. She lives in NJ with her hubby, and four-year-old son.