All I can say is WOW!  I loved this book.  It was original and a real page turner.  It left me thinking...what does happen after we die...

This book is YA but will also appeal to adults...a great book club pick.  It is sure to spike lots of conversation! 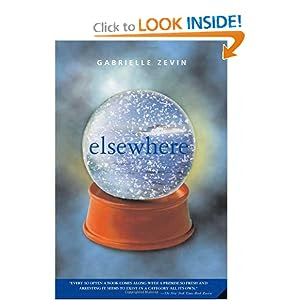 Grade 7-10-This coming-of-age novel by Gabrielle Zavin (Farrar, 2005) has a unique twist. Although Liz is maturing, coping with disappointments, and controlling her anger, she is getting younger. Having been killed by a hit and run driver, she now lives in Elsewhere with the grandmother who died before she was born. After death, the residents get younger until they become babies and are reborn onto Earth again. Initially mad at the driver and sad that she will not have a boyfriend and attend the prom, Liz misses her family and is sullen and depressed. Gradually, she begins to realize that life is not so bad in the hereafter. Although written in the second person, the text and the narration by Cassandra Morris draws listeners into this new world, giving them a sense of immediacy. Morris's youthful, gentle, slightly nasal voice clearly brings out Lizzie's life and frustrations, and her tone becomes harsh to show anger. For the most part, she reads quickly, almost sprightly, but at dramatic moments she slows to heighten suspense. There is no significant voice changes to differentiate between male and female characters. An excellent choice to motivate reluctant readers or just for enjoyment.-Claudia Moore, W.T. Woodson High School, Fairfax, VA
Copyright © Reed Business Information, a division of Reed Elsevier Inc. All rights reserved. --This text refers to the Audio Cassette edition.

*Starred Review* Narration from beyond the grave has been cropping up with some frequency in YA novels this year, including Chris Crutcher's The Sledding Hill and Adele Griffin's Where I Want to Be (both 2005). But this example, Zevin's second novel and her first for the YA audience, is a work of powerful beauty that merits judgment independent of any larger trend.
The setting is an elaborately conceived afterlife called Elsewhere, a distinctly secular island realm of surprising physical solidity (no cottony clouds or pearly gates here), where the dead exist much as they once did--except that no one dies or is born, and aging occurs in reverse, culminating when the departed are returned to Earth as infants to start the life cycle again.

Having sailed into Elsewhere's port aboard a cruise ship populated by mostly elderly passengers, 15-year-old head-trauma victim Liz Hall does not go gently into Elsewhere's endless summer. She is despairing, intractable, sullen, and understandably furious: "You mean I'll never go to college or get married or get big boobs or live on my own or get my driver's license or fall in love?" She rejects her new existence, spending endless hours keeping tabs on surviving family and friends through magical coin-operated telescopes, and refusing to take the suggestions offered by a well-meaning Office of Acclimation. Eventually, though, she begins to listen. She takes a job counseling deceased pets, forges an unexpected romance with a young man struggling with heartbreaks, and finds simple joy in the awareness that "a life is a good story . . . even a crazy, backward life like hers." Periodic visits with an increasingly youthful Liz, concluding with her journey down the "River" to be reborn, bring the novel to a graceful, seamless close.

Although the book may prove too philosophical for some, Zevin offers readers more than a gimmick-driven novel of ideas: the world of Elsewhere is too tangible for that. "A human's life is a beautiful mess," reflects Liz, and the observation is reinforced with strikingly conceived examples: a newly dead thirtysomething falls in love with Liz's grandmother, who is biologically similar in age but experientially generations older; fresh arrivals reunite with spouses long since departed, creating incongruous May-December marriages and awkward love triangles (as Liz experiences when her boyfriend's wife suddenly appears). At one poignant moment, four-year-old Liz loses the ability to read. The passage she attempts to decipher, which comes from Natalie Babbitt's Tuck Everlasting, is another meditation on the march of time and change.

Although Zevin's conception of the afterlife will inevitably ruffle many theological feathers, the comfort it offers readers grieving for lost loved ones, as well as the simple, thrilling satisfaction derived from its bold engagement with basic, provocative questions of human existence, will far outweigh any offense its metaphysical perspective might give. Far more than just a vehicle for a cosmology, this inventive novel slices right to the bone of human yearning, offering up an indelible vision of life and death as equally rich sides of the same coin. Jennifer Mattson Copyright © American Library Association. All rights reserved --This text refers to the Hardcover edition.
Posted by Mrs Mommy Booknerd