In a realm much like yours, but long ago, there was a boy raised as a monk, who never knew he was a prince. One day terrible things came from the forest and burned his home, so he packed his belongings and sought them out, to make them answer for their crimes. Though what he found among thieves and soldiers, winged royalty and wolf men, demons and friends, was a destiny greater than words can describe. 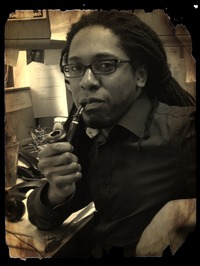 Shomari T. Black was born in California, but then he was moved to Texas. There, he attended Haude Elementary. Haude is pronounced "howdy".
[Pause for laughter]
In the First grade he was caught plagiarizing a creative writing assignment. After a stern talking to from his teacher, and a phone call to his parents, he decided it would be easier to just write original stories. Henceforth, he wrote stories to entertain himself.
Blah blah graduate of Columbia College Chicago blah blah degree in Fiction Writing blah blah Chicago resident.
ooh, here's something interesting
He started writing Sabien's Quest: The Light, when he was 16 but he'll say he's been brainstorming the story his entire life.
He'll read anything by Neil Gaiman or Peter David, but his favorite author is Jerry Spinelli.