“A Whodunit Committed by a Whole Classroom,” is how the New York Times described Naked Came the Post-Postmodernist: A Mystery (Arcade Publishing, November 2013), written collectively by the Sarah Lawrence Class WRIT – 3303 – R taught by Melvin Jules Bukiet. Bukiet picked up a copy of Naked Came the Manatee while he was at a writers’ retreat in south Florida and thought it would make a great premise for his writing workshop at Sarah Lawrence. The students collaborated to create the mystery of who killed Eric Davenport, a senior mathematics professor at Underhill College who is found dead in his office. 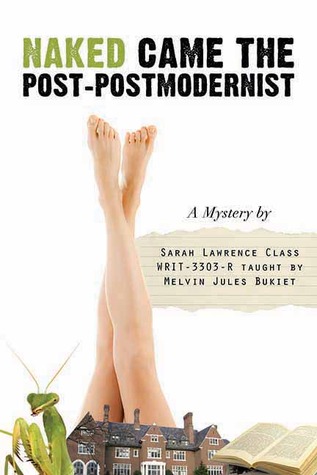 At Underhill, a small liberal arts college with a pricey tuition, a pampered student body, and a familiar setting, all of the students are close to their professors. But at least one loved Eric Davenport in a deeply inappropriate fashion. Some hated him. And then there is the faculty at war with itself. And the administration. And the twin boys who live next to campus. Soon, a student is found dead in the library, and, from the quad to the dorms, crime scenes and crises begin to multiply. A wealthy alumnus donor becomes alarmed. Enter a libidinous medical examiner and a gruff detective. . . . And what’s with all those praying mantises?

The satirical wit of Sarah Lawrence Class WRIT – 3303 – R is a worthy installment in the inglorious “Naked Came” literary tradition: Bukiet’s students have crafted a deft, entertaining, and provocative, look at contemporary campus life. Naked Came the Post-Postmodernist even taps into a more highbrow tradition that was also inspired by life at Sarah Lawrence—Mary McCarthy’s The Groves of Academe.

Depicting rampant insecurities and raging egos, and with a cast of characters including sexed-up faculty members, hemp kids, Ugg girls, and the J. Crew crew, this collective parody of campus culture will delight lit lovers, mystery addicts, and students alike.

A pro bono project whose royalties will be donated to Sarah Lawrence, Naked Came the Post-Postmodernist supports the institution whose setting has so profoundly fueled the creativity of its students and literary masterminds alike.

About the Authors
Sarah Lawrence Class WRIT – 3303 – R comprises the thirteen students in the 2012–13 fiction workshop taught by Melvin Jules Bukiet. Each student is the author of at least one chapter.

Melvin Jules Bukiet is the author of eight books of fiction and has contributed to numerous magazines and newspapers. He lives in New York City.