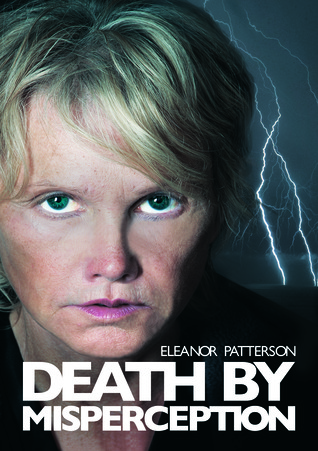 Found close to death, stabbed, with her head battered, 'C' is left with amnesia. She has no identity; blood from two different sources on her clothes and no witnesses to the brutal assault. No-one has reported her missing. Considered to be violent, she is sectioned into a psychiatric clinic effectively as a prisoner.
During recovery her weak, innate extrasensory perception takes hold, as she relives agonising and terrifying moments from her traumatised past. A past she's destined to relive. 'C' had been a programmer and hacker and had unintentionally uncovered dangerous secrets, but could this be the secret to her vicious attack?
Revenge is bitter-sweet for 'C', that is until she faces the ultimate life and death decision.

Death by Misperception by Eleanor Paterson
PRESS RELEASE
A 65-year-old computer programmer battling depression becomes a fugitive after uncovering the existence of a terrorist organisation in this thrilling debut.
Claire McLaren is fighting a losing battle with her boss, a woman hell-bent on making her professional life a misery. Despite being well-respected for her work as a programmer, Claire is struggling under the weight of clinical depression, her condition worsened by her boss’s merciless bullying about her age. On the verge of a breakdown, Claire, by complete chance, runs into an old colleague and nemesis: Sokal. When she discovers that Sokal is involved with a terrorist cell, Claire sets about trying to expose him; but before she can intervene, she is savagely beaten by a group of unknown assailants, sent by Sokal. The impact of the attack has devastating consequences for Claire. As she is found beaten and stabbed and barely alive, with no recollection of who she is, Claire is admitted to a local hospital, where she is wrongfully labelled as dangerously violent. Sectioned in a high-security psychiatric clinic, Claire is plied with a series of experimental neurological drugs, and used as a human guinea pig for her doctors’ illegal drugs testing. After several rounds of medication, Claire suddenly discovers something that almost causes her to question her own sanity; she now has the ability to hear and read people’s thoughts. Desperate to find out why she has developed this supernatural power, and with her aggression heightened exponentially and lethally by the drugs, Claire fights with staff, and escapes.
In an effort to deflect attention away from their illicit activities, the clinic denounces Claire as a terrorist herself. Confused and alone, she becomes the focus of an international manhunt. To prove her own innocence Claire must expose Sokal and the terrorists with whom he is in league. Fortunately for Claire, she has some unexpected allies in high places.

Death by Misperception is a fast-paced, deftly woven thriller with an exciting supernatural twist. Debut novelist Eleanor Paterson draws on her own experiences as a woman facing victimisation in the workplace for reasons she is unable to change - her gender and her age - to produce a complex heroine who has the chance to reinvent herself following a brutal assault. Mature women are often rendered invisible by culture and society, and the striking character of Claire McLaren and her spirited campaign against those who have wronged her, makes for a compelling and refreshing read.

About the Author: Eleanor Paterson was born in West London in 1947. At 45, she left her job as a negotiator for international industrial contracts, having been effectively forced out by her boss. Determined to start afresh, Paterson taught herself computer programming and was subsequently able to embark upon a second career in information technology. At the age of 59 she decided to have a facelift to improve her confidence. Sadly, after a few years she found herself the victim of age discrimination and once again had to leave her job. Having struggled with depression for many years, Paterson found that writing Death by Misperception - alongside yoga and regular meditation - has helped to drastically relieve her symptoms. Paterson now lives in Snettisham, Norfolk. Death by Misperception by Eleanor Paterson (published by New Generation, RRP £8.99 paperback, £4.99 ebook) is available online at retailers including Amazon.co.uk and can be ordered from all good bookstores.