Highlight: Etched on Me by Jenn Crowell 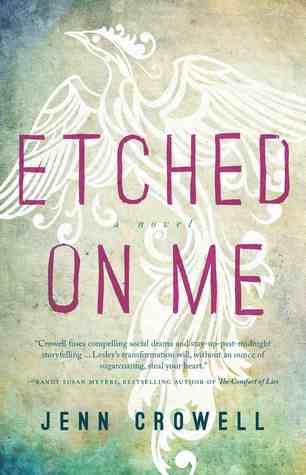 On the surface, sixteen-year-old Lesley Holloway is just another bright new student at Hawthorn Hill, a posh all-girl's prep school north of London. Little do her classmates know that she recently ran away from home, where her father had spent years sexually abusing her. Nor does anyone know that she's secretly cutting herself as a coping mechanism...until the day she goes too far and ends up in the hospital. Lesley spends the next two years in and out of psychiatric facilities, where she overcomes her traumatic memories and finds the support of a surrogate family. Eventually completing university and earning her degree, she is a social services success story, until she becomes unexpectedly pregnant in her early twenties. Despite the overwhelming odds she has overcome, the same team that saved her as an adolescent will now question whether Lesley is fit to be a mother. And so she embarks upon her biggest battle yet: the fight for her unborn daughter.

Photo credit: Hedy Bartleson
website for author:  http://jenncrowell.com/
Born and raised in rural Pennsylvania, Jenn Crowell found herself the subject of international media attention (including a New York Times photographer documenting her high school graduation) when she signed a two-book contract with Putnam in the spring of 1996, a few weeks shy of her eighteenth birthday.
Her first novel, Necessary Madness, was released to wide critical acclaim the following year, with publicity tours of the US, UK, Italy, and Australia. Following her college graduation (sans NYT), Crowell published Letting the Body Lead in 2002. She then ventured into screenwriting, joining a select group of young independent filmmakers as a 2003 IFP Market Emerging Narrative nominee (for her screenplay adaptation of Necessary Madness) and a 2004 Berlin Film Festival Talent Campus Fellow.
Never one to work by a traditional timetable, she earned her MFA in 2011, fifteen years after signing that first contract. She now lives near Portland, Oregon with her husband, young daughter, and two spoiled longhaired dachshunds. Her latest novel, Etched On Me, was published by Washington Square Press in February 2014.