Highlight: His Favorite Regret: A Romantic Comedy (His Favorite, #1) by Sydney Strand 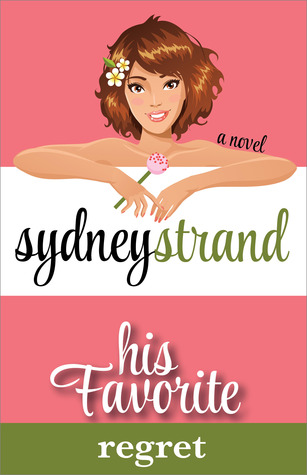 Cadie Calhoun Wade is having a helluva week. She's the Thing of Honor for her sister's wedding. She's finalizing her divorce. The neighbor's dog keeps stealing into her house and treating her feet like a salt lick. And it's a certain anniversary for a day that still stays with her, even a year later.Her childhood best friend is also back in town. And not any ol' friend, either. Bo Garrett just happens to be the most famous action hero in the world.And boy, has Bo missed his Cadie! They parted on such dumb, stupid, moronic terms. And now that he's back in Phoenix to get some outside shots for his latest alien flick, he's not about to let her slip away again. Of course, his agent only has dollar signs in his eyes and thinks Cadie's no Angelina. Bo's sisters have a bit of a vendetta against her, too.With the week Cadie's having, she wonders if it's just too much. That they just weren't meant to be.Which means Bo needs to work overtime to convince her otherwise. Luckily, an action star knows when and how to flash his smile and his muscles. And when to let the heart do the talking instead.

Especially when it comes to the girl who was his biggest regret.

Sydney Strand has been writing novels for the last nine years. This is her first independently published book. Previously, she wrote young adult novels, written under another name, which were published by a Big Name Publisher.
She currently lives in New England with her husband, children, and two moody cats. She enjoys all that Colonial America has to offer. Namely, craft shows and pie festivals. She hopes to one day enter an apple pie contest because, as she's been told, she has an apple pie recipe to die for. Literally. It has three sticks of butter in it.
You can Friend, Pin, Tweet, or Instagram her, as well as visit her website for her monthly reader contest, Oh Goody, Goody GOODIES!