One of the most amazingly gruesome and nearly unbelievable memoirs you will EVER read.  It will shine light on the terrible disorder of MBPS.  A must read...

A young girl is perched on the cold chrome of yet another doctor’s examining table, missing yet another day of school. Just twelve, she’s tall, skinny, and weak. It’s four o’clock, and she hasn’t been allowed to eat anything all day. Her mother, on the other hand, seems curiously excited. She's about to suggest open-heart surgery on her child to "get to the bottom of this." She checks her teeth for lipstick and, as the doctor enters, shoots the girl a warning glance. This child will not ruin her plans.

From early childhood, Julie Gregory was continually X-rayed, medicated, and operated on—in the vain pursuit of an illness that was created in her mother’s mind. Munchausen by proxy (MBP) is the world’s most hidden and dangerous form of child abuse, in which the caretaker—almost always the mother—invents or induces symptoms in her child because she craves the attention of medical professionals. Many MBP children die, but Julie Gregory not only survived, she escaped the powerful orbit of her mother's madness and rebuilt her identity as a vibrant, healthy young woman.

Sickened is a remarkable memoir that speaks in an original and distinctive Midwestern voice, rising to indelible scenes in prose of scathing beauty and fierce humor. Punctuated with Julie's actual medical records, it re-creates the bizarre cocoon of her family's isolated double-wide trailer, their wild shopping sprees and gun-waving confrontations, the astonishing naïveté of medical professionals and social workers. It also exposes the twisted bonds of terror and love that roped Julie's family together—including the love that made a child willing to sacrifice herself to win her mother's happiness.

The realization that the sickness lay in her mother, not in herself, would not come to Julie until adulthood. But when it did, it would strike like lightning. Through her painful metamorphosis, she discovered the courage to save her own life—and, ultimately, the life of the girl her mother had found to replace her. Sickened takes us to new places in the human heart and spirit. It is an unforgettable story, unforgettably told.


From the Hardcover edition. 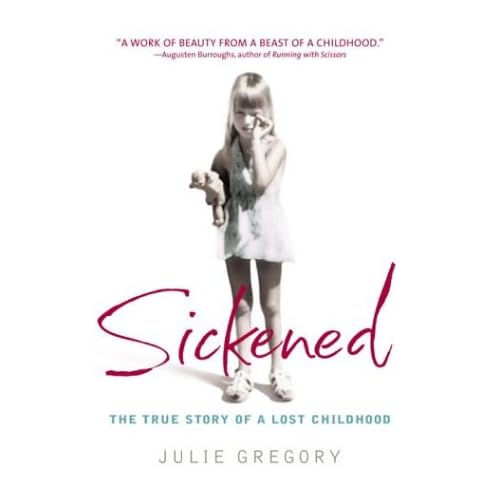