REVIEW & Q&A: HOW TO EAT A CUPCAKE by Meg Donohue 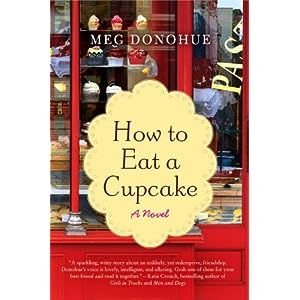 I first want to say congratulations to Meg on the release of her debut novel HOW TO EAT A CUPCAKE.  I could not be more excited to be here at MMBBR celebrating her big day!!!

Donohue has blasted her debut novel right out of the ballpark.  It was moving, believable, well written and real.  The characters were well developed and despite their imperfections you found yourself rooting for them, grieving with them, celebrating with them...just simply feeling for them throughout the entire novel.  The novel was perfectly paced and it kept me engaged from start to finish.  Just when I thought I may have figured things out Donohue threw me for a loop.  I am so excited to see what else Donohue has in store for us as readers.  One thing I know for sure is that she has talent and staying power!  I rate this book 5 stars and highly recommend it.

About the book:
Funny, free-spirited Annie Quintana and sophisticated, ambitious Julia St. Clair come from two different worlds. Yet, as the daughter of the St. Clair’s housekeeper, Annie grew up in Julia’s San Francisco mansion and they forged a bond that only two little girls who know nothing of class differences and scholarships could—until a life-altering betrayal destroyed their friendship.A decade later, Annie is now a talented, if underpaid, pastry chef who bakes to fill the void left in her heart by her mother’s death. Julia, a successful businesswoman, is tormented by a painful secret that could jeopardize her engagement to the man she loves. When a chance reunion prompts the unlikely duo to open a cupcakery, they must overcome past hurts and a mysterious saboteur or risk losing their fledgling business and any chance of healing their fractured friendship. 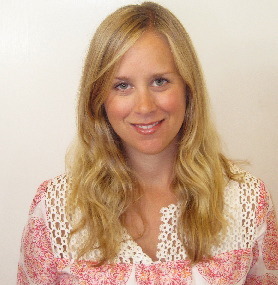 A.  I’m very inspired by relationships, places, and the effect of time on both. I’m interested in how the dynamic of a specific relationship can shift over time as circumstances change and people grow, and also the way people are affected by their environments—the cities they live in and the places they call home.

Q. Your book involves a lot of baking, are you a baker yourself?

A.  Ah—my guilty little secret! No, I’m not a baker. But I like to say that I am a truly avid eater.

Q.  How did you come up with all the delicious flavors of cupcakes?

A.  I did a lot of online research of recipes and cupcakery menus and I watched a lot of cooking and baking shows. Many of the flavors I included were combinations of recipes that I thought sounded like they would be good together.

Q.  What is your favorite cupcake flavor?

A.  Salted caramel. I’m a sucker for the combo of sweet and salty. But I’ve really never met a cupcake I didn’t like.

A.  Making a living doing the very thing I’ve wanted to do my entire life! This really truly is a dream come true for me. It’s what I’ve wanted forever.

A.  Never having time off. I’m thinking about my novel even when I’m not working on it, so I feel like I don’t really get weekends off. Writing a book is obviously a long-term project so I spend most of my time with the book sort of hanging over me.

A.  Deadlines and Diapers. I wrote How to Eat a Cupcake under contractual deadline and I’m doing the same for my second novel, All the Summer Girls, and I’m also the mother of two girls under the age of three so at times it does feel like my life is all about deadlines and diapers. Of course, that’s just my life for the last three years; I’ll have to come up with another title for the thirty years I lived before becoming a mother with writing deadlines!

A.  The Blindfold by Siri Hustvedt. A mysterious, captivating, and somewhat intellectual novel about a troubled graduate student in New York City.

A. The last half of the book came to me much more easily than the first half. The last couple of chapters felt particularly painless.

A. The first two chapters were very difficult. They’re the ones to which I kept coming back and making small changes throughout the entire writing and publishing process.

A.  Tough question! I honestly can’t think of a character to whom I felt very similar, though I have seen parts of myself in many different characters. I suppose I did see a fair bit of myself in Elizabeth Bennet from Jane Austen’s Pride and Prejudice.

Q.  Which character from YOUR book(s) are you most like?

A. Both of the main characters in How to Eat a Cupcake—Annie and Julia—contain pieces of me, but both contain so many other foreign attributes that it’s hard to say which I’m most like. Like Annie, I have an independent streak, I’m sarcastic, and I’m creative. Like Julia, I am very organized, I am ambitious, and I love to eat!

A. Summer! But I live in San Francisco now and summer as I knew it growing up in Philadelphia does not exist in San Francisco. Summer here tends to be cold and foggy and I spend much of June, July, and August complaining about the weather. My next book, All the Summer Girls, is sort of an ode to the East Coast summer.

A. Hmm. I’m still very much in early days of book promotion so I’m afraid I’m a bit low on funny stories. Here’s something marginally comical: The first Advanced Reader Copy of my book was printed with my name as Mary instead of Meg. At the time, it wasn’t that funny, but I can laugh about it now. Somewhere out there are a whole bunch of my books with the wrong name in them.

A.  Yes! I’m working on my next book, All the Summer Girls, which is about three childhood friends whose lives are unraveling in three separate cities. They escape to the beach town where they spent the summers of their youth and end up confronting secrets about one fateful summer night seven years earlier.

A.  Thank you so much for taking the time to read about an unknown, debut novelist! I’m a reader first and foremost so I absolutely love having the opportunity to connect with bookworms like myself. I hope you’ll be in touch and let me know what you think of How to Eat a Cupcake. My email address is hellomegdonohue AT gmail.com. I’d also be thrilled to connect on Twitter @megdonohue and Facebook (http://www.facebook.com/pages/Meg-Donohue/145378748881528