“J. Todd Scott’s The Far Empty is so good I wish I’d written it. The poetic and bloody ground of west Texas has given birth to a powerful new voice in contemporary western crime fiction.” —Craig Johnson, New York Times–bestselling author of the Walt Longmire series
In this gritty crime debut set in the stark Texas borderlands, an unearthed skeleton will throw a small town into violent turmoil.
Seventeen-year-old Caleb Ross is adrift in the wake of the sudden disappearance of his mother more than a year ago, and is struggling to find his way out of the small Texas border town of Murfee. Chris Cherry is a newly minted sheriff’s deputy, a high school football hero who has reluctantly returned to his hometown. When skeletal remains are discovered in the surrounding badlands, the two are inexorably drawn together as their efforts to uncover Murfee’s darkest secrets lead them to the same terrifying suspect: Caleb’s father and Chris’s boss, the charismatic and feared Sheriff Standford “Judge” Ross. Dark, elegiac, and violent, The Far Empty is a modern Western, a story of loss and escape set along the sharp edge of the Texas border. Told by a longtime federal agent who knows the region, it’s a debut novel you won’t soon forget.

“Federal agent Scott’s knowledge of the border country of West Texas is on fine display in his outstanding debut… Scott’s skills as a storyteller are impressive, and his tale of an ambitious young lawman has echoes of the movie Shane and the books of Cormac McCarthy.”—Publishers Weekly (starred review)“This thriller sprawls like the West Texas land of its setting, and, like all those arid miles, it’s fraught with mystery and echoes of a violent past. . . . Scott tells his story in a style placid on the surface and churning underneath, like water about to boil, and, when it does so, it erupts into a series of fine, violent action scenes. Does the finale really clear up all the mysteries?  Not all of them, but some should stay mysterious. That’s their power—and part of this edgy novel’s appeal.”—Booklist“J. Todd Scott's Far Empty is so good I wish I’d written it. The poetic and bloody ground of west Texas has given birth to a powerful new voice in contemporary western crime fiction.”—Craig Johnson, New York Times-bestselling author of the Walt Longmire Series“J. Todd Scott is the real deal. The Far Empty is an astonishing, accomplished debut crime novel worthy of award consideration.”—New York Times-bestselling author Michael McGarrity“A haunting, gritty novel of modern Texas that brings to mind John Sayles's seminal film, Lone Star. As a real-life federal lawman, Scott not only knows the battered terrain but the wounded people who call it home. I loved the authenticity of this forgotten wasteland and the last breaths of the Code of the West.”—Ace Atkins, New York Times Bestselling author of the forthcoming The Innocents“Balancing both the brutal and beautiful, J. Todd Scott has delivered a story that hangs around the neck long after the final page. Fearless, searing prose that reeks of honesty, The Far Empty is as gritty and raw as sun-scorched earth.”—David Joy, author of Where All Light Tends to Go 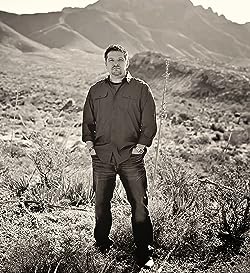 J. Todd Scott was born in rural Kentucky and attended college and law school in Virginia, where he set aside an early ambition to write to pursue a career as a federal agent. His assignments have taken him all over the U.S and the world, but a badge and gun never replaced his passion for books and writing. He now resides in the American Southwest, and when he's not hunting down very bad men, he's hard at work on his next book.
His debut novel, THE FAR EMPTY, will be published by G.P. Putnam's Sons.
He is represented by CK Webber and Associates, and can be hunted down at JTODDSCOTT.COM.