Showcase: IN NEED OF THERAPY by Tracie Banister

Author Bio:  An avid reader and writer, Tracie Banister has been scribbling stories since she was a child, most of them featuring feisty heroines with complicated love lives like her favorite fictional protagonist Scarlett O'Hara.  Her work was first seen on the stage of her elementary school, where her 4th grade class performed an original holiday play that she penned (Like all good divas-in-the-making, she, also, starred in and tried to direct the production.)  Her dreams of authorial success were put on the backburner when she reached adulthood and discovered that she needed a "real" job in order to pay her bills.  Her career as personal assistant to a local entrepreneur lasted for 12 years.  When it ended, Tracie decided to follow her bliss and dedicate herself to writing full-time.  Her debut novel, the Hollywood-themed Blame It on the Fame, was released in January, 2012.  And she's following that up with the fun summer read, In Need of Therapy.

A.  Just about anything.  A story I see in a magazine or the newspaper, an overheard conversation between two strangers, a random comment made by a friend or family member.  I never know when something is going to strike a chord, but it's always very exciting when I have that "Eureka!" moment.

A.  I just love seeing the characters and stories I have in my head come to life on the page.  And I love sharing those stories with other people and finding out that I made them laugh, cry, think, or cheer.

A.  Rejection by agents, editors, etc.  It's especially difficult when they tell you how talented they think you are, but they just can't sell what you've written because of the current market.  I was always told to write what I love, which are stories that are funny and have romance in them, so it's extremely frustrating to then be informed that no one wants to read or buy that type of book.

A.  Well, if we're talking dream jobs, I'd love to own/run a sanctuary for all of the rescue dogs who have special needs because of their age, physical ailments, or abuse/neglect .  I adore dogs and have three rescue Cocker Spaniels, two of whom have special needs, and it's a cause that's very near and dear to my heart.

A.  It's a total cliché, but Jane Austen's Pride and Prejudice had a profound influence on me as a young girl, both as a reader and a writer (Yes, I was writing stories even back then!)  And it's one of the few books I never get tired of.  I've reread it many times and I've seen more film and TV adaptations of the book than I can count.

A.  My all-time favorite fictional heroine is Scarlett O'Hara, so I'd like to think that I share a lot of traits with her - feisty, stubborn, headstrong, determined, passionate, someone who's a fighter and a survivor.

A.  Oh, wow, that's a tough one because almost all of my characters have a bit of me in them.  Personality-wise, I'm probably most like Philippa Sutcliffe in my first book, Blame It on the Fame.  She's very self-possessed, has a biting wit, and doesn't suffer fools gladly.  She, also, has a thing for bad boys, which I'm guilty of.

A.  Autumn.  I love it when the trees turn color and the leaves are such gorgeous, vibrant shades of red, orange, and yellow.  And I adore it when there's a nip in the air (big fan of cool weather.)  Also, the fall season leads into the holidays, so it's full of expectation and excitement.

A.  Oh, my poor cover artist.  He and I went back and forth on the cover for In Need of Therapy many times because it was important to me that every little detail match the vision that was in my head.  The two elements that were crucial to me with this cover were: that the reader saw my heroine, Pilar, in her working environment (a shrink's office), which is where she spends a great deal of time dealing with not only her patients' problems, but her own.  And I wanted the cover to have a Miami flavor, which I think is conveyed beautifully in the color scheme and the window view out of Pilar's office.  I really couldn't be more thrilled with this cover.  It's even better than what I'd originally envisioned.

A.  Promoting my first book was tons of fun, but it was also a roller coaster ride, having to stay on top of things, meet deadlines, and try to keep all of my interviews, guest posts, etc. fresh and interesting.  I had several mini-meltdowns along the way and I bonded with other newbie authors who were going through the same thing.  We took turns "talking each other down off the ledge," which was great practice for writing a therapist character in my second book!

A.  Yes, I'm working on several different writing projects at the moment.  The main one is a Regency novel, which will hopefully be the first in a series, about an aristocratic family of five children, the eldest of whom is being launched into society (think Alcott meets Austen.)  I've, also, got a couple of Romantic Comedies simmering on the backburner and an epic, era-hopping love story with a paranormal twist that I've written a handful of chapters on.

Book blurb:  Lending a sympathetic ear and dispensing sage words of advice is all part of the job for psychologist Pilar Alvarez, and she’s everything a good therapist should be:  warm, compassionate, supportive. She listens, she cares, and she has all the answers, but how’s the woman everyone turns to in their hour of need supposed to cope when her own life starts to fall apart?

While working hard to make a success of her recently-opened practice in trendy South Beach, Pilar must also find time to cater to the demands of her boisterous Cuban family, which includes younger sister Izzy, an unemployed, navel-pierced wild child who can't stay out of trouble, and their mother, a beauty queen turned drama queen who’s equally obsessed with her fading looks and getting Pilar married before it’s “too late.” Although she’d like to oblige her mother and make a permanent love connection, Pilar’s romantic prospects look grim.  Her cheating ex, who swears that he’s reformed, is stalking her.  A hunky, but strictly off-limits, patient with bad-boy appeal and intimacy issues is making passes.  And the sexy shrink in the suite across the hall has a gold band on his left ring finger.

When a series of personal and professional disasters lead Pilar into the arms of one of her unsuitable suitors, she's left shaken, confused, and full of self-doubt.  With time running out, she must make sense of her feelings and learn to trust herself again so that she can save her business, her family, and most importantly, her heart. 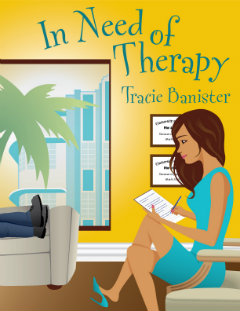