“Lovely…with great illustrations! A heartwarming tale for both adults and children…you really
want to find out what Walter is going to do with the wallet!”–Lucinda Franks, Pulitzer Prize-winning author 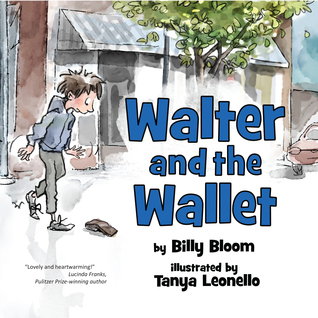 "Rolling, rhyming four-line stanzas, accompanied by Tanya Leonello’s expressive watercolors, build excitement as Walter buzzes with the thrill of endless possibilities, and warm the heart as he discovers the rewards of honesty and giving. Perfect for a story-time read-aloud or programs that promote virtues and character building."

Walter Whippingdale is having the worst day of his life. The girl he likes is making googly eyes at another boy in his class. He struck out during recess. He broke his favorite watch. A giant pimple appeared on his nose. And to top it off, he somehow managed to get mustard in his eye at lunch! Walking home from school, his head is hanging low. Which is precisely how Walter spots a wallet lying in the street…a wallet bursting with cash. Suddenly, his terrible day is about to change. But how?
Billy Bloom is an elementary school teacher in New York. Before becoming a teacher, he had several other jobs, including professional Frisbee player (finishing 6th in the World Championships in 1983), newspaper editor, advertising copywriter, and volleyball league owner. He currently referees middle and high school volleyball and basketball games after school and on weekends. This is Billy Bloom’s debut children’s book.